A Red Eye Tree Frog by artist Amber Gillett features on the can.

When an amphibian biologist, a wildlife vet and a craft brewer join forces, the frogs of the Northern Rivers’ world heritage rainforests are the winners.

$1 from each lager will go towards raising awareness and funds for research and conservation of frog populations and wildlife care across the Northern Rivers region.

Dr David Newell, an amphibian expert at Southern Cross University, says the outlook is not bright for native frogs, with many along Australia’s east coast being wiped out by disease, while locally habitat is shrinking for the unique Gondwana rainforest mountain species. 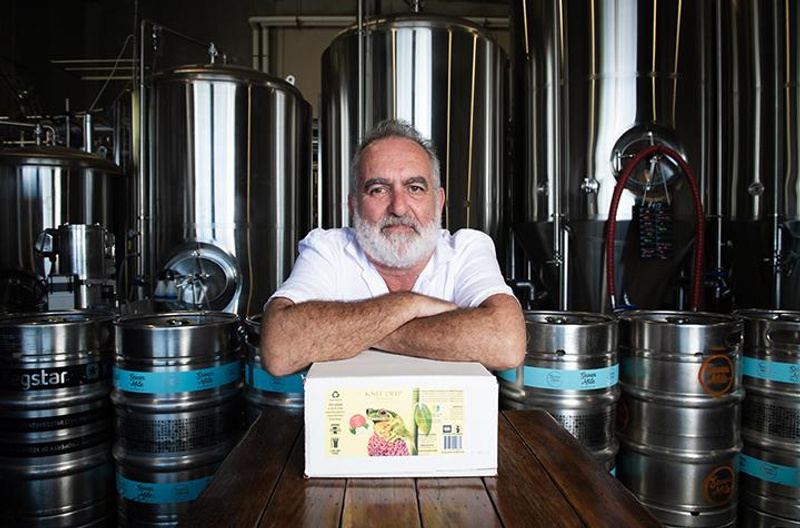 Mr Ben Roche, Vice President of Engagement, explained why the University hopped onboard with the novel partnership.

“This announcement reflects two important elements of the collaboration that we are celebrating through the launch of Knee Deep,” said Mr Roche.

“Firstly, that we need to bring together knowledge and action to create positive impact. Secondly, in doing so we need new and novel approaches to ensure we are being effective in how we connect with people and together learn about what we can collectively do to support action for threatened species.

“Has the University ever featured on a drink can? No – but in doing so, we recognise that knowledge and action need to meet in new and innovative ways, and as a University focused on creative real impact through our research, we need to be open to what form that may need to take,” Mr Roche said. “Our veterinarians are treating native frogs injured by cats and dogs. There is a growing need for dedicated services to treat and rehabilitate all types of wildlife.

“’Drink beer, save wildlife’ is our motto, knowing that by consuming this beverage (responsibly of course) you’re contributing to improving outcomes for our native fauna.”

“For Knee Deep, we’ve taken our Wildling Ginger Beer and added a native twist. Inspired by the humble Green Tree Frog, which we are especially fond of, we’ve added some local green finger limes into our blend to help cut through the sweetness and give a well-balanced zing!”

To coincide with the launch of Knee Deep, Seven Mile Brewing is also re-releasing its popular Koala Lager, number-1 in the wildlife series.