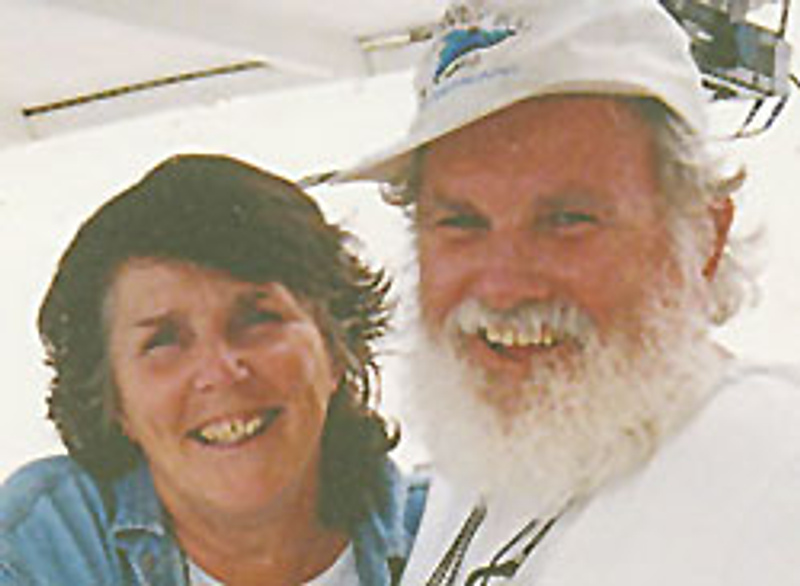 This research project was established by the Principal Investigators Trish Franklin and Wally Franklin and is funded by The Oceania Project and in part funded by the Australian Research Council (ARC) in partnership with the Southern Cross University Whale Research Centre and the International Fund for Animal Welfare (IFAW).

Hervey Bay provides a situation that is unique in the world as humpback whales aggregate there for several months each year prior to their southward migration.

Thus the research project initiated by Trish and Wally Franklin provides an outstanding opportunity for collecting data which, when integrated with what is necessarily more fragmented data on humpback whales from elsewhere, will contribute to a complete overview of the biology, ecology and behaviour of the Southern Ocean humpback whales.

Appropriate IP Agreements are in place, which ensure that the data collected by Trish and Wally Franklin, who are both PhD Candidates at SCUWRC, are made available for such integration through collaboration. Commercial whaling operations drastically reduced the population of humpback whales in Australian waters; hence there is a need for long-term projects
such as this to provide long-term monitoring data on the recovery of humpback whale populations, their behaviour, use of key habitats, population parameters and genetics.

These data are essential for appropriate management of humpback whales, hence this project can be justified on both scientific and management grounds.

Eastern Australian humpback whales are considered to be a relatively discrete breeding stock termed E1 and feed in the Antarctic Area V management area (1300 E to 1700 W) as defined by the International Whaling Commission (IWC 2006; Olavarria et al. 2006). They commence the southern migration from the breeding grounds in July each year to their Antarctic feeding areas and return by June the following year.

Hervey Bay (Queensland, 25oS, 153oE), formed by Fraser Island, is west of the northward migratory route and 20 south of the Great Barrier Reef lagoon. On the northward migration that peaks during June and July, humpback whales do not enter Hervey Bay. The migration stream passes Breaksea spit (24o36'S, 153o20'E) to the northeast of Hervey Bay and then inclines to the northwest, with whales dispersing widely between the outer Great Barrier Reef and the Australian coast. Previous studies suggested that the large inter-reef lagoon of the Great Barrier Reef, between 16oS and 23oS, represents the primary over-wintering and breeding grounds of eastern Australian humpback whales.

On the southward migration, large numbers of humpback whales make a diversion from the southern migratory pathway and pass inside Breaksea Spit to enter Hervey Bay. Humpback whales move into Hervey Bay from late July and during August, September and October. They enter and leave from the north and aggregate in shallow water close to the western shore of Fraser Island in the eastern part of Hervey Bay. Aerial surveys have shown that groups are not randomly distributed but tend to aggregate in clusters. Mother and calf pods are the final cohort to migrate southwards and enter Hervey Bay during September and October. On leaving Hervey Bay humpback whales travel north, rounding Breaksea Spit to the east before rejoining the southward migratory stream.

Previous studies of humpback whales in Hervey Bay in the late 1980s and early 1990s examined such topics as migratory movement, distribution, pod size, residency, relative abundance, behavioural response to whale watching vessels, seasonal abundance trends and survival probabilities. It has been suggested that the non-random clustering of humpback whales aggregating in Hervey Bay might be related to social factors. However, there is no previous data indicating that Hervey Bay is of importance to any particular class of humpback whale.

Hervey Bay is formed by Fraser Island and is located at 25oS, 153oE on the eastern coast of Queensland. It is a wide shallow bay approximately 4000 km2 in area and is generally less than 18 metres deep, with a sand and mud bottom. Fraser Island is 126 kilometres long; it lays along a northeasterly axis and its northern end bridges the continental shelf.

The most southerly islands of the Great Barrier Reef are directly north of Hervey Bay at a distance of between 60-120 nautical miles (Figure 1 below). Vessel based observations of humpback pods were conducted for ten weeks each year from 1992-2008 and are ongoing. Data collected includes photo-identification of humpback groups and individual whales, behavioural information, sloughed skin samples, spatial data and acoustic surveys.

The aim of this project is to study individual social behaviour, social organisation, population parameters and migratory interchange of humpback whales in Hervey Bay.

The specific objectives of this project (and current status of the research) are summarised below: Figure 1. The location of Hervey Bay on the East coast of Australia and its geographic relationship to the islands and inter-reef lagoon of the Great Barrier Reef. The shaded area (16oS to 23oS) along the Queensland coast is considered to be the primary over-wintering and breeding ground for Humpback whales within the Great Barrier Reef. The study area is shown on the eastern side of Hervey Bay.