Spotted gum is so-called because of its characteristic dimpled bark (credit Merv Shepherd).

Southern Cross University forest scientists can lay claim to a pivotal role in establishing the green shoots for sequencing the genome of Australia’s spotted gum.

Since its release in May this year, the genome sequence of the spotted gum (Corymbia citriodora subsp. variegata) has attracted attention from scientists around the world.

The spotted gum genome is the second fully assembled reference genome to be published for a ‘eucalypt’, a group of iconic trees found throughout Australia and of international importance for forestry.

“The project was born from the desire to understand the genetic basis of the trees’ remarkable adaptability and hardiness,” Dr Shepherd said.

“Spotted gum is favoured by foresters for more marginal sites because it can provide relatively good growth rates and will tough it out during times of drought when other species would fail. But it can also take advantage of better rainfall and soil conditions to provide high growth rates on more productive sites.

“If we can identify the genes that instilled spotted gum with these characters of plasticity and resilience, this could give us direction to breed eucalypts that are better placed to remain productive in more variable climatic conditions in the future,” he said. A spotted gum plantation near Kyogle in Northern NSW. Spotted gum is an important timber plantation species in the subtropics of Australia, China, Brazil and South Africa (credit Merv Shepherd).

Given the enormity of the undertaking to uncover the species ‘genetic essence’ Southern Cross University researchers reached out to scientists from the universities of the Sunshine Coast, Tasmania, Queensland and overseas institutions in USA and Brazil to form a consortium in 2012 to sequence the genome.

Fast-forward to 2021 and the team of 22 scientists have made their efforts public in a paper Pests, diseases, and aridity have shaped the genome of Corymbia citriodora published in the Nature journal Communications Biology. The spotted gum reference genome is hosted along with the Eucalyptus reference genome by the US Department of Energy Joint Genome Institute.

Spotted gum gets its name from its characteristic dimpled bark.

It belongs to a group of eucalypts, known as the Corymbia. One of their distinguishing features is showy bunches of flowers, or ‘corymb’, at the end of their branches.

Spotted gum is an important plantation species for the subtropics of Australia and overseas, where it is planted for a highly-prized timber used in furniture and flooring products.

It belongs to an iconic group of some 800 trees and shrubs known as the ‘eucalypts’ that are native to Australia and neighbouring islands in Indonesia, PNG and the Philippines. Eucalypts are among the most widely planted trees in the world.

Here in Australia spotted gum is indigenous to forests of Eastern Australia, with the variety most favoured for timber production in the subtropics, found from Central Queensland to the NSW mid north coast.

A north Queensland variety is also used as a source of a lemon-scented essential oil distilled from its leaves.

“It is very pleasing to finally have the genome available to other scientists around the world and see it is attracting attention,” Dr Shepherd said.

“I think this interest comes from the opportunities to compare it with the genomes of other eucalypts, and the potential to learn more about what makes spotted gum and other eucalypts valuable for forestry.” Professor Brad Potts from the University of Tasmania’s ARC Training Centre for Forest Value was among the collaborators.

“Achieving these high-quality genome assemblies are mega projects. It is one thing to sequence a genome but quite another to stitch the millions of tiny bits of sequence together into chromosomes and reliably position genes – especially when done independently of other genome assemblies to allow comparative studies,” Professor Potts said.

Dr Shepherd explained that comparing the genome of spotted gum with that of its relative, Eucalyptus grandis, genetic differences were revealed that have arisen in the lineages of the two species since they diverged from a common ancestor around 60 million years ago – after the last mass extinction of the world’s plants and animals, including the dinosaurs – when Australia was still linked with Antarctica.

Some of the differences found between Eucalyptus and Corymbia were in gene families related to disease inhibition and aridity adaptation.

“This genetic difference is a legacy of both historical selection due to differences in the climates and soils their progenitors encountered over geological time, as well as adaptive differentiation as the species evolved to better fit their habitats in the landscape of northern Australia,” Dr Shepherd said.

Dr Shepherd and the team from Southern Cross University hosted the first meeting of the consortium at Lismore in 2015 where the initial draft of the spotted gum genome sequence was reported.

“The meeting allowed the members to see native spotted gum firsthand as well local spotted gum plantations and the processing of timber at the Hurford’s Mill at Kyogle,” he said.

Since that time, Dr Adam Healey, a then PhD student at UQ, undertook the task of assembling the genome, carrying out comparative analyses and identifying genes that make spotted gum unique. It is through the dedicated efforts of Dr Healey, now a scientist with HudsonAlpha in the USA, the spotted gum genome sequencing project came to fruition.

The study found that, despite the long time since the divergence in their lineages, the genomes of the two eucalypts – Corymbia citriodora and Eucalyptus grandis – are remarkably similar, with relatively few chromosomal-scale differences.

“Nonetheless, lineage specific expansion in numbers of genes, particularly gene families that influence the composition of leaf waxes and oil, and are thus likely to be important in helping the tree cope with pests, heat and aridity, were evident. This provides clues to the types of genes that may be important in explaining some of the uniqueness of spotted gums, and their admirable properties of adaptability and resilience,” Dr Shepherd said.

Associate Professor David Lee from the University of the Sunshine Coast has led the Australian breeding efforts with bloodwoods.

“This reference genome will be invaluable for future gene discovery and help the breeding of bloodwoods for uses including timber and biomass production, carbon sequestration, and even essential oil and charcoal production,” Professor Lee said. 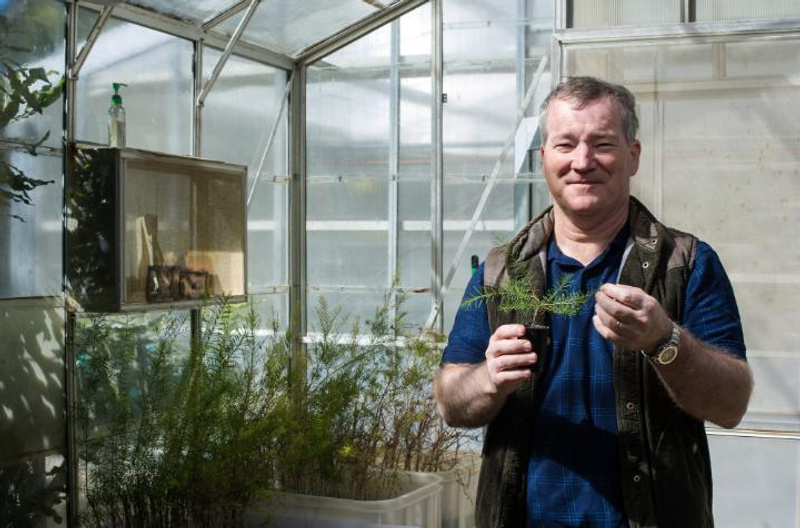 Dr Merv Shepherd with tree tea seedlings in a greenhouse on the Lismore campus.

Dr Merv Shepherd is a Senior Research Fellow in the Faculty of Science and Engineering. Since 2017 he has been the project leader for the Tea Tree breeding program based at Southern Cross University and a CRC (Cooperative Research Centre) project developing clonal propagation systems for tea tree. Establishing the genetic basis of variation in characters for product quality and the productivity of tea tree oil production has been a major research interest of Dr Shepherd since 2010.

Dr Shepherd’s research interests are in the genetics of forest trees and industrial crops. This involves the assessment of morphological, anatomical or chemical difference in tree populations, and relating this with genetic variation at the DNA sequence level.