“Supporting DZ Deathrays and Planet for a 14-show tour across Germany, France, UK, Switzerland, and Belgium has definitely been a highlight for us as a band, and we’re playing tighter than ever,” says WHARVES lead singer Matt Collins of their 2019 European tour. They’ve also supported Wolfmother, The Living End, Rolling Blackouts, Kingswood and Dear Seattle; and played Bigsound, Falls Festival, Festival of the Sun and Byron Guitar Fest.

“The access to world class lecturers and facilities at Southern Cross really helped kick start us as a band. Being surrounded by like-minded musicians with similar ambitions is a great reason to study music at the University, and the Northern Rivers is a hub for creatives – especially musicians,” Matt says. Bachelor of Contemporary Music (majoring in Industry and Audio Production)

“Supporting DZ Deathrays and Planet for a 14-show tour across Germany, France, UK, Switzerland, and Belgium has definitely been a highlight for us as a band, and we’re playing tighter than ever,” says WHARVES lead singer Matt Collins of their 2019 European tour. They’ve also supported Wolfmother, The Living End, Rolling Blackouts, Kingswood and Dear Seattle; and played Bigsound, Falls Festival, Festival of the Sun and Byron Guitar Fest.

“The access to world-class lecturers and facilities at Southern Cross really helped kick start us as a band. Being surrounded by like-minded musicians with similar ambitions is a great reason to study music at the University, and the Northern Rivers is a hub for creatives – especially musicians,” Matt says.

Anastasia Scales released her first EP, was a Byron Bluesfest stage manager and toured the country as a drummer for various artists, all while studying contemporary music at Southern Cross University.

Her song ‘Grow Up’ aired nationally on ABC Rage after she was among a handful of emerging artists to win a triple j Unearthed NIDA music video competition in 2015.

"'Grow Up', from my EP 'Transit', is a conscious and positive hip-hop over a synth pop beat. It's worth a lot of money to have a film clip of this calibre done. It was made by the directing, design and production students at the National Institute for Dramatic Art (NIDA). I'm really happy with the result. The reaction from everyone has been so special. It has given me more exposure, which has led to more shows and connections within the music industry. I have teamed up with a mostly female collective called Indigo Rising who are about supporting each other creatively. It's always nice to have someone on stage with you. I'm super thankful to the teams at triple j Unearthed and NIDA." Violence against women is not okay. It took Paulette Hayes 12 months – or 425 hours – to make 79 model houses to represent the 79 women killed in Australia in 2013.

She says it was worth it, not just for the satisfaction of seeing her artwork series ‘Control. Abuse. Kill.’ unveiled at the University’s 2019 Graduate Art Exhibition, but for the message it sends.

“The death of women cannot be dismissed as just a domestic incident. Instead, it is a tragic loss of a mother, a daughter, a sister,” says Paulette.

“I use my art to remember these women. A house is symbolic of our body and it is also a place where women hope to be safe.”

“It’s always been important to me that the past is remembered, that we tell the truth for healing to occur, and that we have a place to focus our grief.” 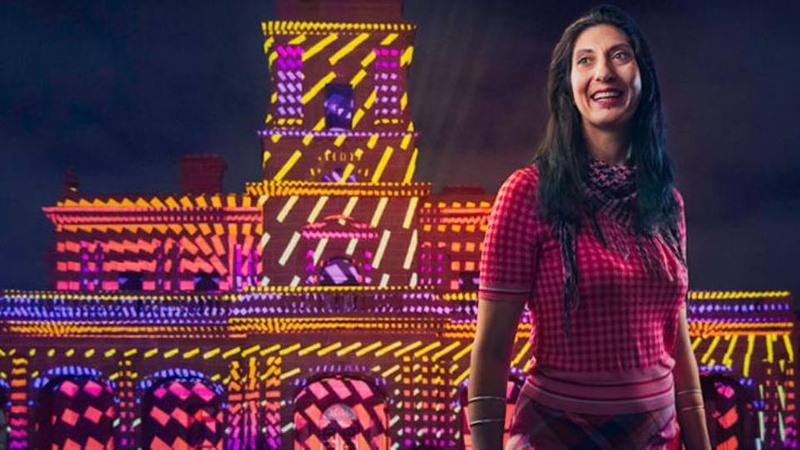 Bachelor of Art and Design

The word ‘radiance’ means the reflection or emission of light. Rose Staff’s choice of artist name, also Radiance, was not accidental.

Her large-scale installations are a gorgeous visual feast of light and movement that have featured in some of the most well-known festivals and contemporary galleries around the country and internationally – from Vivid in Sydney to the UK’s Glastonbury Festival and Athens Digital Art Festival in Greece, the Museum of Contemporary Art in Montreal and The Australian Centre of the Moving Image.

Rose’s work uses experimental hybrids of traditional and digital art that might take the form of 360-degree immersive dome projections inside a circular architectural space or motion tracking of the physical body to manipulate and alter visual imagery, drone photography or even animations with synchronised soundscapes to creative audio-visual installations. Jules Allen (right) had been working in youth support and child protection for several years when she decided to boost her TAFE qualifications with a university degree. She started a Bachelor of Social Science at 30, juggling full-time study with work and being a parent.

"Theories of sociology helped me make sense of what was going on and to see issues from a different perspective,” Jules said.

“It taught me a lot about communication and the art of listening and asking questions. I found my people within the degree – we were interested in how society works and what we could do to change it." Co-presenter of Inside the NRL on NRL.com

Katie Brown, the co-presenter of Inside the NRL on NRL.com, is proof a small-town girl can make it big in the sports broadcast arena of Sydney.

Born and bred on the NSW mid north coast, Katie has been with the online TV show since it launched in 2018. The panellists – Katie plus sports journalist Michael Chammas and former NRL player Jamie Soward – debate the hot topics each Monday during the national rugby league season.

“I got a call one day, out of the blue,” she said, reflecting on the experience of being headhunted by NRL.com. “They said ‘We’re starting NRL digital and we’d love you to be part of it. Would you consider moving to Sydney?’ This opportunity was too good not to have a go at. It was the best decision I ever made. It’s been unreal.

“I feel quite humbled and in hindsight I’m pretty lucky. I certainly made the right decision. My experience shows that a girl from Grafton can compete in a metropolitan market. People appreciate that I am down-to-earth. They find me relatable.” Self-motivation and a love of content creation helped opened many doors for Emily Page -- along with her Screenworks membership.

“Screenworks put me in touch with many opportunities, including working on Deadlock, a five-part web drama series for ABC TV and ABC iView that premiered in 2018,” she says.

Emily’s role was Production Office Attachment and Runner during her internship on the Deadlock set. She paid a wage while working alongside the highly experienced film crew from Every Cloud Productions.

“The experience helped me bridge the gap between being a student filmmaker to a professional. I now also have an industry credit to my name,” Emily says.

“And through my involvement with Screenworks, I have been able to gain other work opportunities in reality TV and feature films.”

Prior to that, Emily was chosen for a prestigious training program with NEP Australia, the host television broadcaster for the 2018 Gold Coast Commonwealth Games. Emily was one of just eight university students selected for NEP’s Host Broadcast training program, designed to provide a multi-sport international broadcast experience. "I grew up in a low socioeconomic welfare housing estate in NSW where the prospect of university was just a dream. I was expelled from high school before my 14th birthday and decided the welfare and education system had failed me. I wanted to implement change within the realm of social welfare but paradoxically realised I required a sound education to do so."

Canditta has been working at Lives Lived well (LLW) since a field placement there in the second year of her degree. From that she gained employment at LLW's residential drug and alcohol rehabilitation treatment facilities in Logan, near Brisbane, as a therapeutic community worker doing counselling, case management and facilitation group therapy sessions.

“Just before graduation, I was offered a position facilitating a pre-release Drug Offenders' Intervention Treatment Program at a maximum-security prison for men in Wacol. For 18 months, I case-managed forensic clients with addiction and behavioural issues, maintained case notes and wrote progress reports to our founding body, the Queensland Department of Health and Ageing.”