Dr Qi Guo has been awarded the Chancellor's Medal.

Changes in membrane lipids in salt-tolerant plants has been identified as an important salinity tolerance mechanism by a Southern Cross University PhD researcher.

The discovery is good news for global agriculture and will inform future work by plant breeders to engineer salt-tolerant crops.

Dr Qi Guo, who conducted the research during her PhD work at Southern Cross Plant Science, impressed her thesis examiners. She received the Chancellor’s Medal, the University’s highest accolade for an outstanding thesis, during the Gold Coast graduation ceremony on 30 June 2022.

“I feel great about receiving the Chancellor’s Medal. It’s the best acknowledgment for all the hard work I put in during my PhD,” said Dr Guo, an international student from China.

“Winning this medal and receiving this honour is the best gift I, as a student, can give my supervisors, especially Professor Bronwyn Barkla, who gave me a lot of encouragement, help and support.”

The build-up of salt in soil, known as soil salinization, is a serious land degradation issue worldwide, limiting the productivity of crops. Too much salt causes toxicity and osmotic stress to the plants, limiting their ability to take up water and nutrients.

Understanding the tolerance mechanisms employed by halophytes (salt-tolerant plants growing in soil or waters of high salinity) is of great value for ultimately identifying biomarkers for salt-tolerant crop breeding. 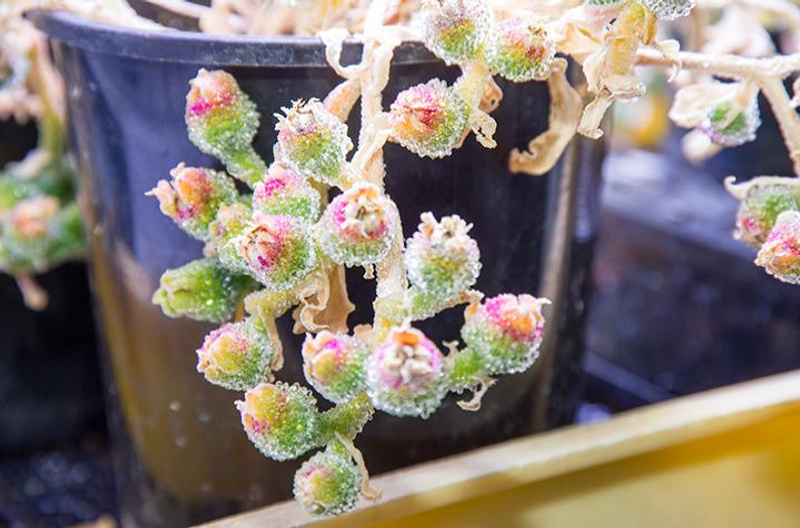 Ice plant (Mesembryanthemum crystallinum) was used in the study.

“The first thing we need to do is understand the molecular mechanisms of plant salt tolerance, which is why we chose to use a salt-tolerant plant, commonly known as ice plant (Mesembryanthemum crystallinum), a plant native to South Africa but naturalised in Australia,” said Dr Guo.

The discovery involved painstaking work, analysing tissue specimens of the ice plant measuring just a thousand-millionth of a metre.

To achieve this, Dr Guo capitalised on advanced specialist equipment at the University’s Lismore campus, only available in very few Australian research labs.

“My project has a special focus on the plant’s membranes which are mainly composed of lipids and proteins. These membranes surround the organelles and cell itself and are very important because they are the first line of defence for the plants against salt stress. They function to sense and transfer the signals from the external environment into the cell to trigger mechanisms which help limit the uptake of excessive sodium and chloride ions from the soil,” she said.

“The result of my studies indicated that one of the mechanisms used by this plant to tolerate salt is by regulating its membrane lipid composition.

“Hopefully these new molecular features can be developed as bio-markers which can be used to improve the salt tolerance of crop plants in the future.” (A) Microsomal membranes from leaf tissue of Ice plant grown under control and salt conditions were extracted, homogenized, and fractionated by FFE into 96 fractions based on net surface charges (diagram from the paper 'Salt stress alters membrane lipid content and lipid biosynthesis pathways in the plasma membrane and tonoplast').

Dr Guo said soil salinization is usually caused by natural processes such as the accumulation of salt over many thousands of years or the weathering of rocks.

“But these days human activities like the use of salt-rich irrigation water is aggravating these problems. It is estimated that over 20% of agricultural land worldwide is affected by salt. Soil salinization is worse here in Australia because the soil is naturally rich in salt.”

“Focusing on the lipids is a relatively new approach and we are just learning how important these molecules are in signalling and regulation within the cell,” Professor Barkla said.

“Qi’s work was a big step in this direction and the importance is demonstrated in the two high-impact publications that have come out of this work.”

Dr Guo has been researching agricultural science for more than 10 years. She has a Bachelor degree in seed science and engineering and a Master’s degree in crop genetics and breeding from universities in China.

Professor Graham King, the previous Director of Southern Cross Plant Science, invited Dr Guo to pursue doctoral research in Australia after she impressed him with her presentation when he was visiting her university in China.

“I’m grateful to Professor King. I came to Australian five years ago to start my PhD research. Now I’ll continue working at Southern Cross University as a research assistant helping colleagues with data analysis which is one of my strengths,” said Dr Guo.

“As an international student we can experience a lot of challenges, like language barriers, cultural differences and financial difficulties. However, whatever difficulties I encountered during my PhD, whether it was in my life or my studies, my supervisors Bronwyn and Dr Ben Liu were always there for me and tried their best to help me. I really appreciate that.”