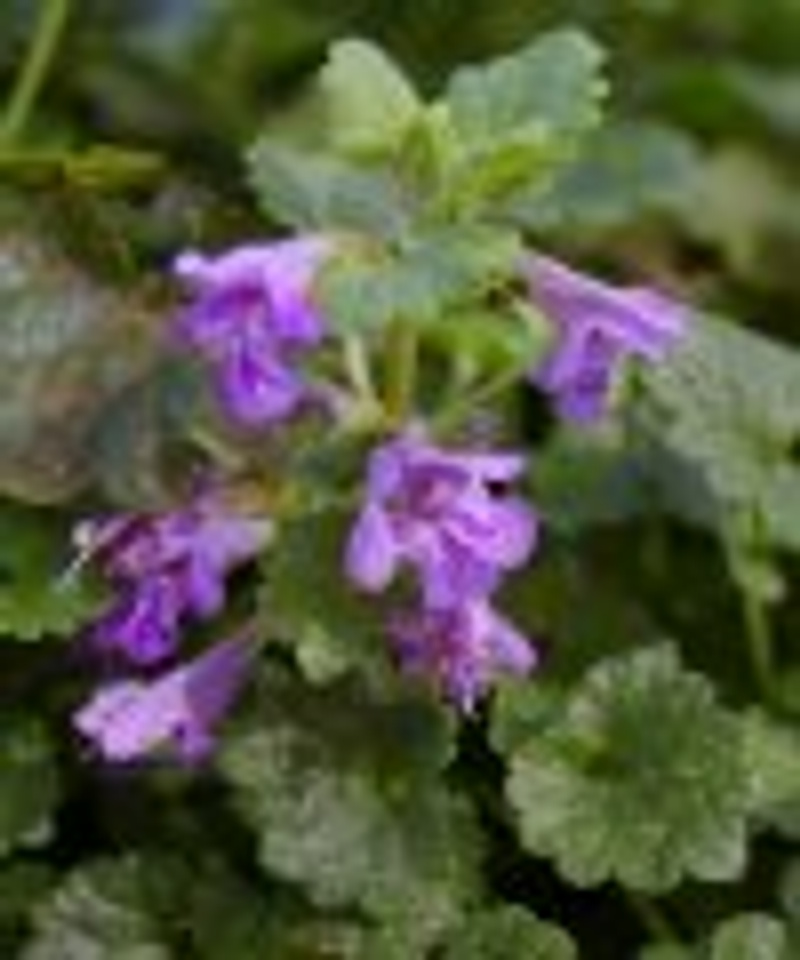 G. hederaceais a creeping perennial that grows to 15 cm. Originally native to Europe and Western Asia, is now naturalised in many other temperate regions (1, 6). It is characterised by the presence of purple or yellow green square stems, and green opposite serrate shaped leaves, as well as blue-pink-violet flowers (3, 4).

G. hederacea thrives in shady places (1). It is often found alongside fences, hedges, roads and wet meadows or on the outskirts of woodlands throughout its native distribution (7).

Due to its vigorous growth in favourable conditions G. hederacea is often regarded as a weed (6).

G. hederacea was at one time a popular herb (6, 8). In the early part of the 16th century, it was used to clarify and flavour beer before the introduction of hops (8-10). This gave rise to its synonym Alehoof (8).

G. hederaceawas amongst the earliest herbs brought by European settlers to North America (10). The American physicians of the early 19th century had numerous applications for it and in England at the time, it was regarded as a cure-all (8).

The popularity of G. hederacea has diminished with time resulting in its exclusion from many Materia Medica in favour of other herbs. Despite this, the success of G. hederaceain treating respiratory catarrh with kidney and/or gastrointestinal involvement, has ensured that it remains in use amongst traditional herbalists (1, 8, 11).

Flavonoids
Flavanol glycosides and flavones glycosides (12).
Seven known glycosides have been identified from the whole plants (13)

Lectin
Gleheda is found in the leaves of G. hederacea during early stages of maturation and is considered a potent insecticide. Lectins are common in the Fabaceae family and gleheda is thought to be related both evolutionarily and structurally to lectins found in legumes (17).

The chemistry and some pharmacological actions of G. hederacea have been relatively well studied and provide insight and support for some of the herbal uses (1, 10, 18). These studies however, have not included human trials and medicinal use of G. hederacea is largely based on traditional herbal knowledge (10).

A study using mouse peritoneal macrophages examined the effect of G. hederacea on nitric oxide (NO), interleukin (IL) and tumour necrosis factor-alpha (TNF-alpha) which were induced by interferon-gamma and lipolysaccharide. Results showed that G. hederacea inhibited production of NO (in a dose dependent manner), a pro-inflammatory cytokine and TNF-alpha. No effect was shown with IL-6 production and increased production of one IL. The study concluded that G. hederacea could be used to control inflammatory diseases that are mediated by macrophages (20).

Anti-cancer activity of ursolic acid and oleanolic acid isolated from G. hederacea was studied in vivo against Epstein Barr Virus tumour production in mouse skin. The inhibition of tumour promotion in mouse skin was successful and considered comparable to a known tumour promoter inhibitor, retinolic acid (22).
One study has looked at the free radical scavenging potential of 45 plant species. Results indicate that the n-hexane extraction of G. hederacea using a methanol extraction had considerable free radical scavenging activity (23).

No clinical human trials on the actions of G. hederacea have been conducted to date (10, 18).

No documented contra-indications or cautions (10, 18).

The volatile oil component of G. hederacea contains pulegone which is known to be hepatotoxic and a gastrointestinal irritant (25). Although present in low concentrations, caution is recommended for use during pregnancy, lactation and in combination with other herbs containing pulegone (10, 18).

Hypothetical interactions have been proposed with some medications (oral contraceptives, iron, asprin, warfarin) based on the ascorbic acid content of G. hederacea (none of the above herb-drug interactions have documented cases) (10).

27. Medline [database on the Internet] 2008. Available from: <http://www.scu.edu.au/library/online/database>