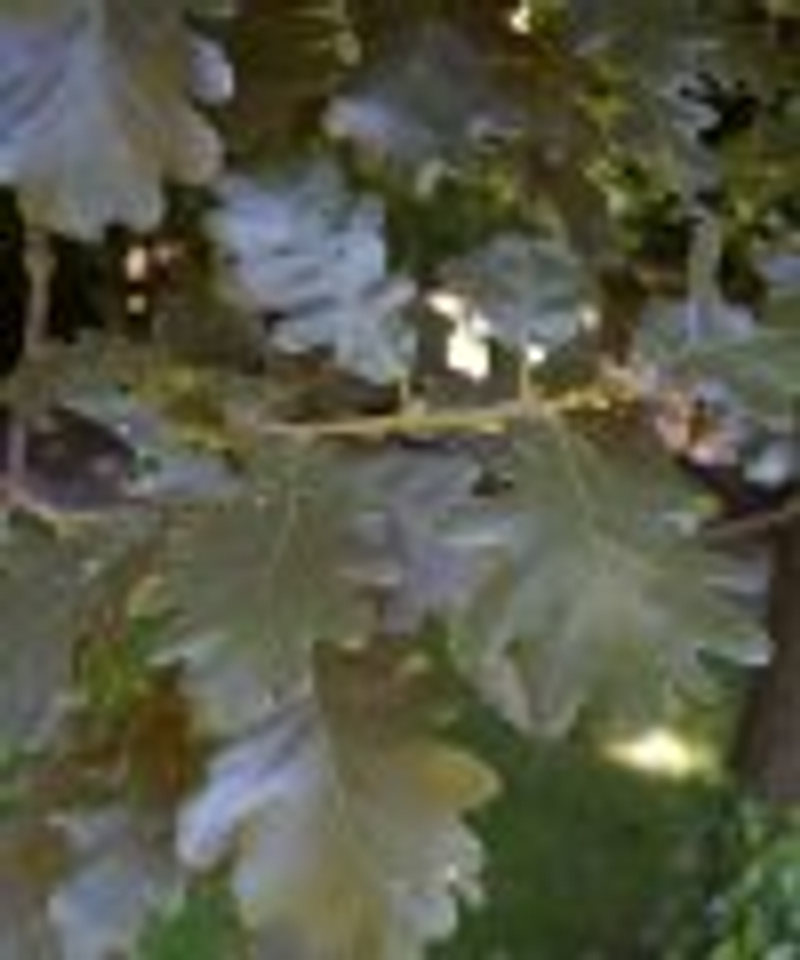 Quercus robur is widely distributed throughout Europe (5, 7) and England (7). It is a deciduous tree reaching 45 metres with leaves which are deeply lobed (5) and flowers of two kinds; the male, or barren, in long drooping catkins 2 to 8 cm long (5, 7) appearing with the leaves, and the fertile flowers and leaves found in distant clusters (7). The fruit produced is an acorn approximately 1 to 3 cm long and appearing in shades of green to brown (5, 7).

The genus name Quercus comes from a Celtic word, quer, meaning ‘fine’ and cuea, meaning ‘tree’ (1). The oak, for many centuries was the chief forest tree of England, and is closely bound up with the history of Druid times (1, 5, 7). Believed to be sacred, the oak was used to tan leather and smoke fish (5) and a spray of oak was engraved on one side of sixpences and shillings (7).

Traditionally Quercus robur has had many uses. Owned by Jupiter the bark was used to stay the spitting of blood and a decoction used to prevent vomiting (9). Numerous references are made to its cooling action and it was used internally or externally for inflammation (9). It is known as one of the best remedies for inflammation of the eye (10), and was implicated for use in exhausting night sweats, and fevers as a substitute for quinine (7, 9, 11). It was also said to have a cooling effect upon the liver (9).

Reference to its use in the urinary system and upon kidney function are present in historical texts, where the acorn powder taken in wine was said to promote urine (9), the bark to cause weak stimulation of the renal and lower urinary system (12), and act as a tonic upon the kidneys (13).
Reference to its use on the skin is revealed in numerous historical texts where water found in the hollow places of old oaks was said to be effectual against the spreading of foul scabs (9), a decoction applied to ulcerations with unhealthy, fetid discharges or spongy granulations (4, 10, 11), or for the treatment of gangrene (4, 11). It was also known to act as a tonic upon the skin (13).

An affinity for treatment of the oral cavity is noted with reference to its use in cases of bleeding of the mouth (9), ulcerated and putrid sore throats (4, 11, 14) and as a gargle in aphthous sores (14). Other various documented uses include diphtheria (14), cholera (10, 11), marasmus, scrofula, diabetes, menorrhagia, obstinate intermittents (11) and to purge worms (10). A wash of oak bark was also used for a prolapsed rectum or a 'falling of the bowels', where a portion of the bowels protrudes from the anus (4, 10).
Weak suppression of the upper and lower gastrointestinal tract was historically noted of Quercus robur (12) and a distilled water preparation was known as one of the best remedies for milky vaginal discharges in women (9). Also used historically for the treatment of advanced breast cancer, a wash of oak bark tea was applied to the area of tumour growth (10).

Quercus robur additionally played a role in convalescence and was used in incidences of great exhaustion of the vital powers from disease and debility to restore the fading powers of life (11). A decoction of the acorns and the bark in milk was also used as an antidote to poisonous herbs and medicines (9). In terms of its preparations it is noted historically that water extracts its qualities fully, whereas diluted alcohol works less fully (14).

The effects of the tannin content of Quercus robur on worms of the gastrointestinal tract were tested in vitro. The effects were measured on 3rd-stage larvae and adult worms (including Teladorsagia circumcincta, Haemonchlus contortus and Trichostrongylus colubriformis species) with significant inhibitory effects obtained at both stages. In order to assess the activity of tannins, polyethylene glycol (PEG), an inhibitor of tannins, was added to oak extracts. Without PEG, significant inhibitory effects on 3rd-stage larvae and adult worms were seen. After addition of PEG, the larval migration and motility of adult worms were restored in most cases. This suggests that the tannin content of Quercus robur is partly responsible for the effects (23).

No clinical human studies have been conducted on Quercus robur as of this time.

5. Chevalier A. 2001. The Encyclopaedia of Medicinal Plants. Penguin.